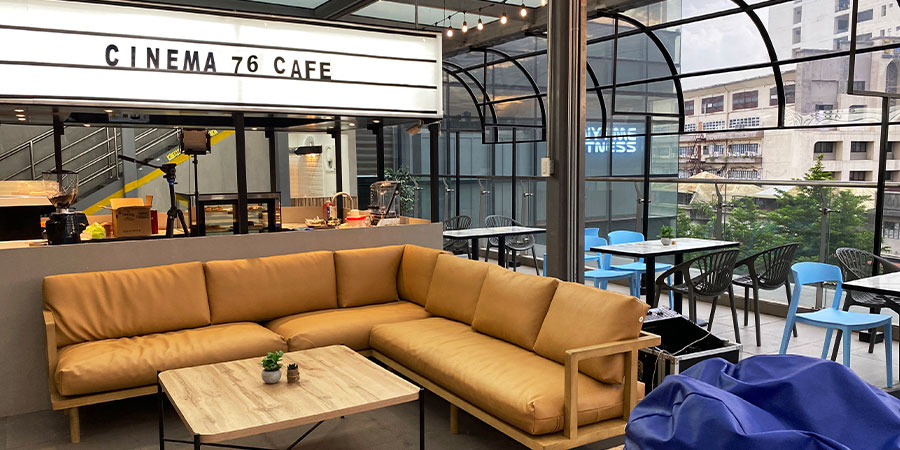 Filipino moviegoers have surely missed going to the cinemas. While that experience is irreplaceable, TBA Studios offers an alternative option that will surely bring fond memories to local cinephiles as it launches Cinema ’76 Café on June 11.

Cinema ’76 Café is an al fresco dining spot located on the third floor of the Anonas LRT City Center in Quezon City.  Envisioned to be a haven for film and coffee lovers alike, the open-air neighborhood coffee shop has a unique movie-themed inspired décor.  Some visual references include posters from TBA Studios’ well-loved films and a very comfortable ‘bench seating’ reminiscent of Cinema ’76 Film Society’s signature couch seats.

Aside from delicious hot and iced coffee beverages, the café offers a wide array of drinks—bottled Coffee Matcha, Salted Caramel Latte, and Popcorn Frappe are just some of the ones guaranteed to be instant favorites. For pastries and desserts, Cinema ‘76 Café recommends its delectable Mango Cake. This tasty treat is said to be a playful nod to the iconic mango scene from TBA Studios’ 2018 blockbuster “Goyo: Ang Batang Heneral.”

Apart from the safe outdoor dining set up on its balcony, Cinema ‘76 Café also ensures the safety of its customers while continuing to deliver quality food and service. Before entering, customers need to step on a disinfectant mat, apply alcohol provided, and have their temperatures checked. They also have to fill up the contact tracing form either manually or via QR code.

Tables and chairs, and other fixtures and surfaces are disinfected after every use. Cinema ‘76 Café also uses an air sterilizing and disinfecting machine round-the-clock. Stringent safety protocols are also in place for food preparation and handling.

Cinema ‘76 Café also offers faster and more convenient ways for customers to order safely from their homes. Cinema ‘76 Café has partnered with online food delivery apps FoodPanda and GrabFood.
For those looking for some personal touch, you can chat with Cinema ‘76 staff via Facebook, Instagram, Twitter, or order directly via phone or Viber at +63906 236 2365.

Cinema ’76 Café is also offering curbside pickup for take-out orders.  Customers can simply call or message in advance to avail of this service.

Cinema ’76 Café is officially open starting Friday, June 11, 2021. For its soft launch operations, the café will operate daily except weekends from 1 pm to 7 pm.

Film aficionados outside the Philippines will no longer be left behind as they get the chance to see “Dito at Doon” (“Here and There”) via the international premium video-on-demand service.

Filipinos and cinephiles abroad can sit back and enjoy the must-watch movie of the year “Dito at Doon” (“Here and There”) through TBA Play starting on May 1.

The most talked-about movie in the Philippines right now, “Dito at Doon” (“Here and There”) has been receiving rave reviews from critics and public alike since its domestic online release on March 31, with the film being called a “touching and timely romantic tale” with “stellar performances from its lead cast Janine Gutierrez and JC Santos”.

“Tellingly, ‘Dito at Doon’ (‘Here and There’) is both a time capsule and a tribute to the Filipinos who continue to survive the pandemic.  It is a story that needs to be told and be seen by Filipinos wherever they are in the world,” said Eduardo A. Rocha, TBA Studios, CEO and Executive Producer.

“With TBA Play, Filipinos living abroad will no longer feel left behind in seeing our world-class films like ‘Dito at Doon’ (‘Here and There’) that not only entertain but also reveal the Filipino experience,” he added.

TBA Play is a premium video-on-demand service catering to millions of Filipinos abroad yearning to connect with their friends and families back home.  Through this platform, viewers can now catch the best and the latest Pinoy movies anytime, anywhere with no ad interruptions.  TBA Play houses a catalog of award-winning and well-loved films featuring some of the brightest stars in the Philippine entertainment scene.

TBA Play is currently available in over 60 countries, including USA, Canada, and select territories in Middle East, and North Africa. TBA Play is also partnered with international distribution and sales company, TVCO to bring TBA Play contents to key markets in Europe.

TBA Studios also shares that the public can expect more exciting news in the coming months as TBA Play continues to beef up its programming line up and add new countries to its list.

Set during the first months of the pandemic, “Dito at Doon” (“Here and There”) revolves around political science graduate Len (Janine Gutierrez) and her online/offline frenemy Caloy (JC Santos). With polarizing views and challenges of not being physically together, will their relationship survive?

“Dito at Doon” (“Here and There”) is exclusive on TBA Play for a limited time only in USA, Canada, and select territories in Europe, Middle East, and North Africa starting May 1.  Viewers can watch their film of choice starting at USD7.99 / EUR7.99 while ‘Dito at Doon’ will have an early bird rate of USD8.99 / EUR8.99 until April 30. For a full list of countries and updates on availability in other regions, tba.ph and follow https://www.facebook.com/tbaplaymovies.

Watch the most talked-about Filipino movies anytime, anywhere with no ad interruptions through TBA Play, the latest movie streaming platform catering to millions of Filipinos worldwide.

TBA Play houses a catalog of award-winning and well-loved films featuring some of the brightest stars in the Philippine entertainment scene. Accessible and affordable, TBA Play is currently available in over 60 countries across 4 regions worldwide with multiple language settings for viewers’ convenience. Pricing starts for as low as USD 7.99.

TBA Play is operated by TBA Studios, one of the leading film production companies in the Philippines and producers of the blockbuster movies “Heneral Luna,” “Goyo: Ang Batang Heneral,” “I’m Drunk, I Love You.,” and “Sunday Beauty Queen.”

Set during these pandemic times, this relatable Janine Gutierrez—JC Santos romance movie was supposed to have arrived in theaters nationwide last March 17.

But after much deliberation, a thoughtful decision was arrived at by the film’s producers, especially taking into consideration everyone’s health and safety in mind.

“We feel this is the best possible way to make sure that everyone’s ‘Dito at Doon’ movie experience is a safe and enjoyable one,” said E. A. Rocha, TBA Studios’ CEO and one of the executive producers for ‘Dito at Doon.’”

Set during the current pandemic, “Dito at Doon” revolves around political science graduate Len (Janine Gutierrez) and her online/ offline frenemy Caloy (JC Santos).  Len works from home, and is someone who fights for things she loves and believes in.  Caloy, on the other hand, is a front liner and has a perspective that’s different from Len’s.  With their polarizing views and challenges of not being physically together, will their relationship survive?

Directed by JP Habac of “I’m Drunk, I Love You” fame, “Dito at Doon” also features host and stand-up comedian Victor Anastacio (likewise playing someone who’s deprived of the physical presence of a loved one) and theater actress Yesh Burce, with the special participation of Janine’s real-life mom Lotlot de Leon.

The film was developed, shot and completed during the pandemic, which continues through now, with March being its anniversary month.  It incorporates such “lockdown” realities as e-numan, video calls, DIY learnings as well as being a plant parent, while reflecting on the possibility that the “new normal” could be poised to stick around longer.

“We know how much it means for movie fans to finally share a moviegoing experience together, whether at home or wherever they choose to see it with friends and family. We’re proud to bring this timely yet timeless, heartwarming film to all,” Rocha added.

During a recent bloggers’ conference, lead actor JC Santos said he was grateful to TBA Studios for providing income opportunities for those who work in the entertainment industry especially in these uncertain times. “Hindi mo alam ang mangyayari bukas at hindi mo alam kung makaka-trabaho ka pa. [Itong ‘Dito at Doon’] isa siya sa pinakamalapit na nangyari sa akin,” expressed Santos who sees “Dito at Doon” as one of his most personal projects.

Netizens have been supportive of the film since it released its trailer on March 4.

“Kami po nina Janine, JC, and the rest of ‘Dito at Doon’ team are so thankful to everyone who’s been constantly messaging us on social media to let us know how excited they are to see ‘Dito at Doon’,” shared director JP Habac.

Starting this Wednesday, March 31st, film fans and enthusiasts can catch the much-anticipated romantic film at

Book now to avail of the ongoing early bird promo and enjoy “Dito at Doon” for only Php 300. This special offer is for a limited time only. Regular price is at Php 350.  “Dito at Doon” is brought to you by TBA Studios, in association with WASD Films.

Film aficionados outside the Philippines will also have a chance to see “Dito at Doon” (“Here and There”) as TBA Studios prepares a worldwide release via premium video on demand (PVOD), which will be announced very soon.

TBA Studios and WASD Film would like to thank official media partners Myx, WheninManila.com, and Rappler. Special thanks to Fernando’s Bakery.

TBA Studios’ upcoming film “Dito at Doon” will proceed with its scheduled online release this coming March 31, 2021, while its theatrical release is currently on hold.  The JC Santos – Janine Gutierrez romance movie was supposed to arrive in theaters nationwide on March 17.

The change comes after careful decision among the film’s producers with everyone’s health and safety as their utmost priority.

“We have decided to release ‘Dito at Doon’ exclusively online for the time being.  This was a very difficult decision for the whole team, but one that has everyone’s best interest in mind,” said E. A. Rocha, TBA Studios’ CEO.

Set during the pandemic, “Dito at Doon” revolves around political science graduate Len (Janine Gutierrez) and her online/offline frenemy Caloy (JC Santos).  With polarizing views and challenges of not being physically together, will their relationship survive?

The film was developed and shot during the pandemic, and was slated to be the first big local movie to be released a year since the pandemic started.

“We know how much it means for a lot of people to finally share this experience together on the big screen and we feel positive that there would still be a chance for us to do so. But for now, we are happy to offer an accessible and convenient alternative for Filipino movie fans eagerly waiting to see ‘Dito at Doon’,” Rocha added.

Book now to avail of the on-going early bird promo and enjoy “Dito at Doon” for only Php 300. This special offer is for a limited time only. Regular price is at Php 350.

Film aficionados outside the Philippines will have a chance to see “Dito at Doon” (“Here and There”) too as TBA Studios prepares a worldwide release via TBA Play, the company’s premium  video-on-demand (PVOD) platform soon.

“We are so grateful to everyone who has shown love and support for this film.  We hope that they would continue to extend that support not just for ‘Dito at Doon’, but the whole Philippine Film Industry as well.  It has been a challenging year, but we at TBA Studios remain hopeful.  We appreciate everyone’s patience and we look forward to bringing this timely yet timeless, heartwarming film to you very soon.” Rocha expressed.