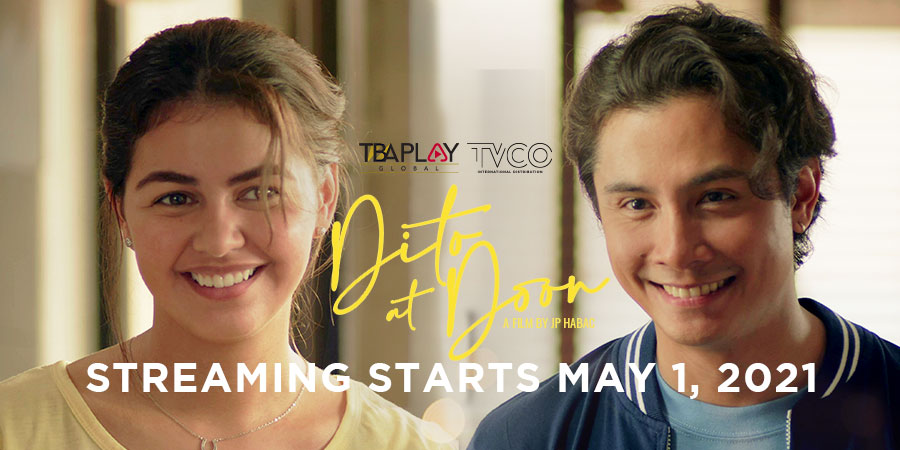 Film aficionados outside the Philippines will no longer be left behind as they get the chance to see “Dito at Doon” (“Here and There”) via the international premium video-on-demand service.

Filipinos and cinephiles abroad can sit back and enjoy the must-watch movie of the year “Dito at Doon” (“Here and There”) through TBA Play starting on May 1.

The most talked-about movie in the Philippines right now, “Dito at Doon” (“Here and There”) has been receiving rave reviews from critics and public alike since its domestic online release on March 31, with the film being called a “touching and timely romantic tale” with “stellar performances from its lead cast Janine Gutierrez and JC Santos”.

“Tellingly, ‘Dito at Doon’ (‘Here and There’) is both a time capsule and a tribute to the Filipinos who continue to survive the pandemic.  It is a story that needs to be told and be seen by Filipinos wherever they are in the world,” said Eduardo A. Rocha, TBA Studios, CEO and Executive Producer.

“With TBA Play, Filipinos living abroad will no longer feel left behind in seeing our world-class films like ‘Dito at Doon’ (‘Here and There’) that not only entertain but also reveal the Filipino experience,” he added.

TBA Play is a premium video-on-demand service catering to millions of Filipinos abroad yearning to connect with their friends and families back home.  Through this platform, viewers can now catch the best and the latest Pinoy movies anytime, anywhere with no ad interruptions.  TBA Play houses a catalog of award-winning and well-loved films featuring some of the brightest stars in the Philippine entertainment scene.

TBA Play is currently available in over 60 countries, including USA, Canada, and select territories in Middle East, and North Africa. TBA Play is also partnered with international distribution and sales company, TVCO to bring TBA Play contents to key markets in Europe.

TBA Studios also shares that the public can expect more exciting news in the coming months as TBA Play continues to beef up its programming line up and add new countries to its list.

Set during the first months of the pandemic, “Dito at Doon” (“Here and There”) revolves around political science graduate Len (Janine Gutierrez) and her online/offline frenemy Caloy (JC Santos). With polarizing views and challenges of not being physically together, will their relationship survive?

“Dito at Doon” (“Here and There”) is exclusive on TBA Play for a limited time only in USA, Canada, and select territories in Europe, Middle East, and North Africa starting May 1.  Viewers can watch their film of choice starting at USD7.99 / EUR7.99 while ‘Dito at Doon’ will have an early bird rate of USD8.99 / EUR8.99 until April 30. For a full list of countries and updates on availability in other regions, tba.ph and follow https://www.facebook.com/tbaplaymovies.

Watch the most talked-about Filipino movies anytime, anywhere with no ad interruptions through TBA Play, the latest movie streaming platform catering to millions of Filipinos worldwide.

TBA Play houses a catalog of award-winning and well-loved films featuring some of the brightest stars in the Philippine entertainment scene. Accessible and affordable, TBA Play is currently available in over 60 countries across 4 regions worldwide with multiple language settings for viewers’ convenience. Pricing starts for as low as USD 7.99.

TBA Play is operated by TBA Studios, one of the leading film production companies in the Philippines and producers of the blockbuster movies “Heneral Luna,” “Goyo: Ang Batang Heneral,” “I’m Drunk, I Love You.,” and “Sunday Beauty Queen.”