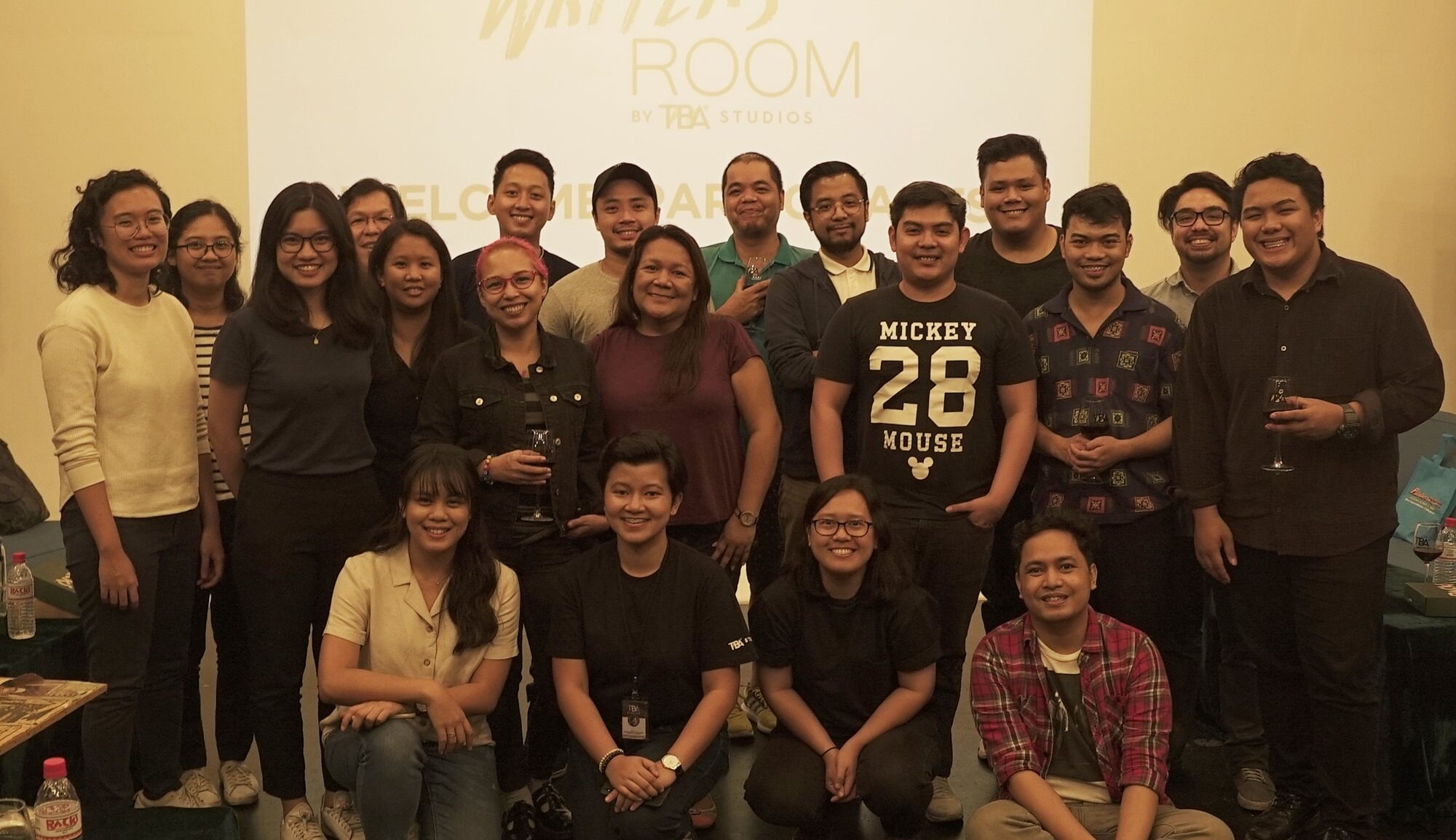 From The Writers’ Room to FAMAS nom: ‘Dito at Doon’ writers share their creative journey 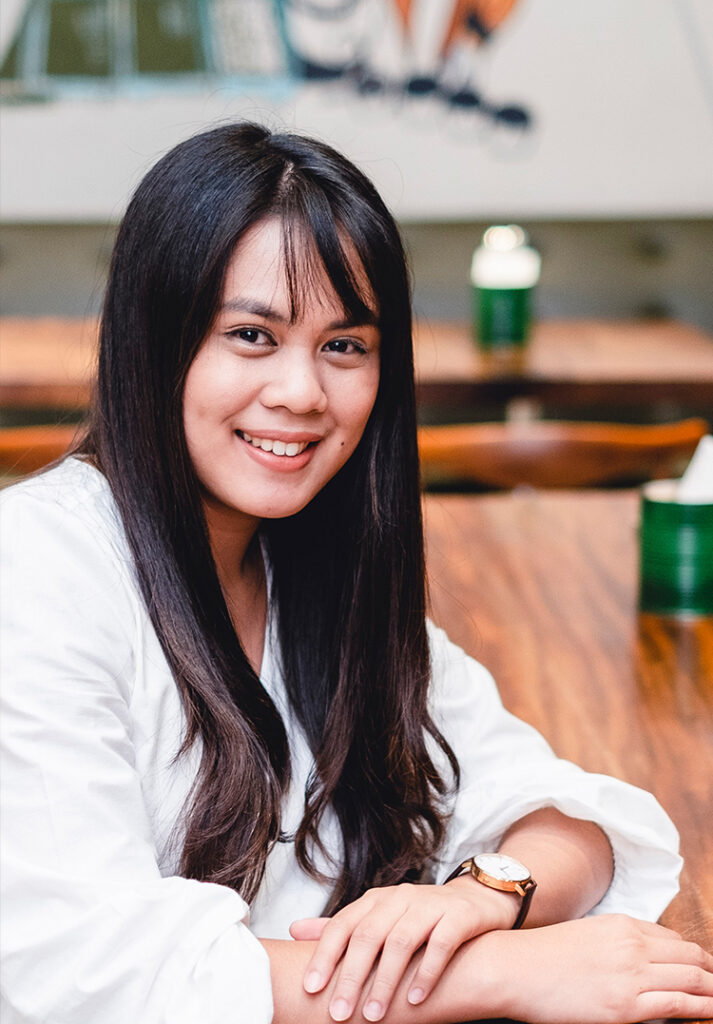 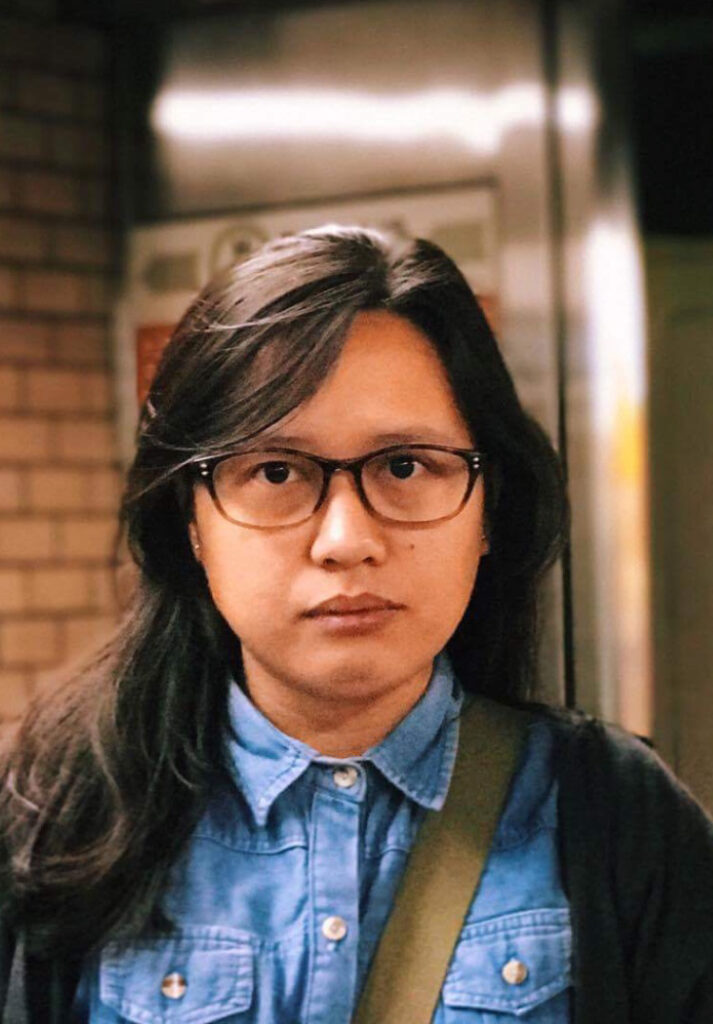 Elsewhere, Kristin Barrameda was thrilled to receive the news that she was chosen for The Writers’ Room as well. Almost a year before the announcement, she quit her job as a post-production supervisor to develop her projects for submission to film markets and development labs. “After I finished my initial script under the mentorship of Sir Ricky Lee, I heard that TBA would be initiating another writing workshop, and I excitedly applied, hoping to further refine the script that I had,” she recalled.

It was Aug. 30, 2019, barely six months before the pandemic broke the world. But in the next 13 weeks, they would learn and explore limitless ways a story can be born.

Into ‘The Writers’ Room’

Alex, as most people fondly call her, grew up harboring an interest in stories, no matter what form they came in. “Shows, movies, books, comics, video games – you name it. And while I did try my hand out at creative writing, writing for movies as a career seemed like a lofty aspiration when I was growing up,” she recalled.

Her interest in stories, however, never died, so she pursued a career in a similar field: advertising. “I was a copywriter for an ad agency for a handful of years, writing 30- and 60-seconder commercials for various brands. It was there that my interest in storytelling really took off,” Alex added. So when friends prodded her to join The Writers’ Room, she bit the bullet.

“The Writer’s Room was memorable in its entirety. It felt like a door to a different world was opened to me, and as an outsider, everything was new,” Alex said. “It was an enriching experience to meet people from various fields and learn from the screenplays they shared with everyone. We had beginners, award-winners, lawyers, directors, anthropologists, animators, sharing stories of different flavors, all bound by the same craft.” 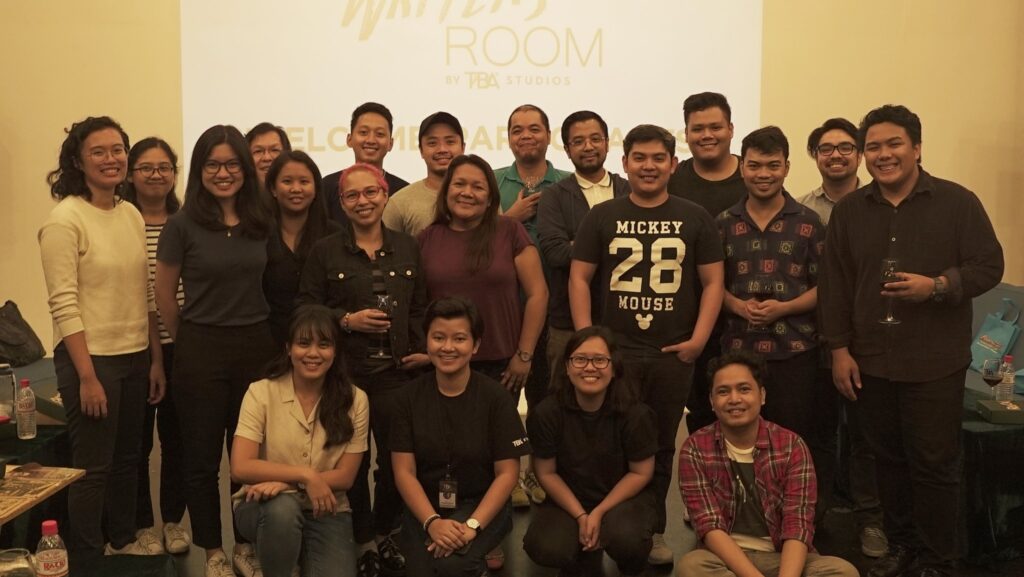 Also coming from a similar background, Kristin, a former copywriter, never considered writing for film a full-time track because she had fallen in love with post-production. “But I think it’s becoming a respite from my work in post has helped me have fun with the process even more,” she said.

At “The Writers’ Room”, Kristin was inspired to learn with people, especially with those who love films and stories the same way she does. “While the mentors were a huge help in understanding more about writing, I find that I learned as much from my classmates in the workshop. Reading our exercises in class and exchanging feedback were definitely beneficial, not only when it comes to writing, but also in terms of defending our characters and the worlds that we build in our stories.”

Alex said her favorite part was the pitch presentation. “I was very nervous throughout; my hand shook the whole time I was presenting in front of the panel,” she said. “It cemented the notion that ideas need actual selling for projects to really take off.”

Alex learned that writers would need to know their panel, how to appeal to them, and be able to clearly express the idea for their film with the right mix of conciseness and emotional impact.

Alex and Kristin seemed to be kindred souls because of their shared experiences. So when the workshop was done, it wasn’t a surprise they would find themselves collaborating on writing a script in the middle of the pandemic.

‘Dito at Doon’: Writing under lockdown

February 2020 came and the world did break.

But the isolation proved to be ideal for writing. In May 2020, Omar Sortijas, then producer of TBA Studios, reached out to Alex and Kristin to write a screenplay.

“It all started when our producer Omar Sortijas contacted us about fleshing out the concept he had in mind: a couple falling in love during the pandemic, but they won’t be able to meet. And just like Len and Caloy, my co-writer Kristin and I never met in person during the whole process,” Alex recalled. 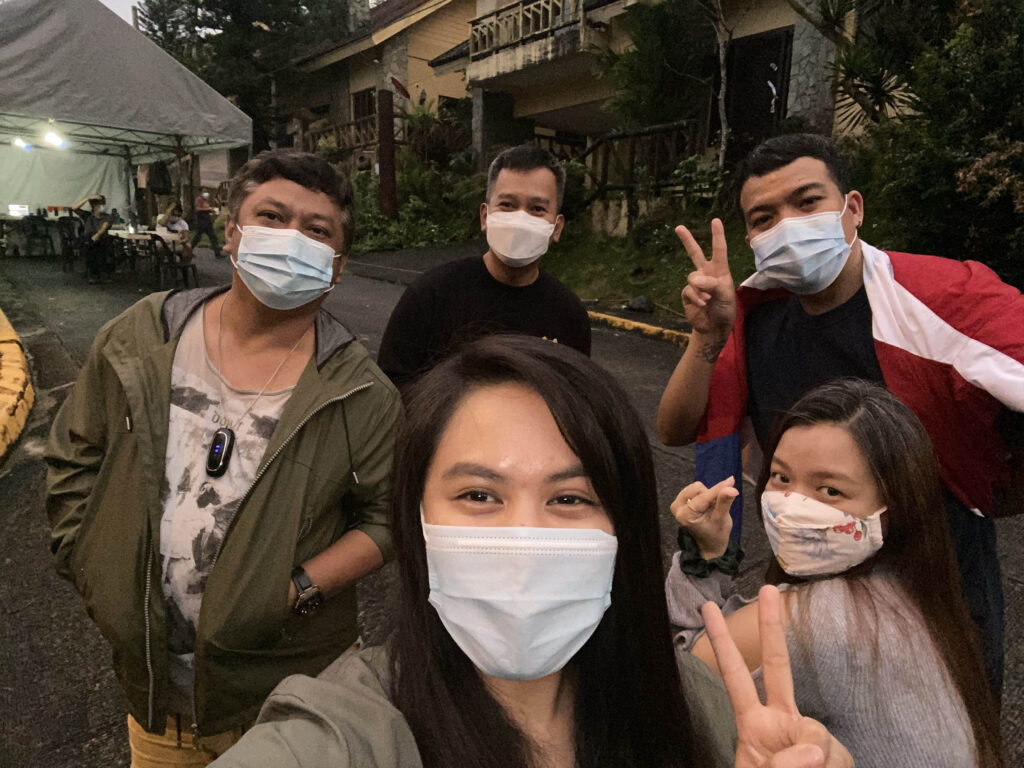 Alex on the set of “Dito At Doon” (Source: Alex Gonzales)

Since the Philippines was on lockdown during that time, the two women had no chance to meet and write together, so the script was completed entirely remotely. “We would schedule writing sessions and collaborate through Google Docs,” Kristin shared. “If I remember correctly, we finished the initial draft in less than a week, but the final shooting script was done as the film was about to roll around November that same year.”

Director JP Habac of “I’m Drunk, I Love You.” fame sometimes joined their brainstorm sessions and transformed the initial computer screen format into the distinct spatial-visual treatment that was used in the film. Once the project was well under way, script readings and meetings were held via Zoom.

Alex said that throughout the drafts they worked on, they changed character ages, background stories, added some characters and eventually removed the said characters. “Over maybe five to six months, it took us around five drafts to get to the final version of the script,” she said.

Kristin and Alex echoed each other that their writing collaboration was smooth. “Writing ‘Dito at Doon’ was a welcome challenge. Despite it being our first full-length project together, Kristin and I got along well. We listened to each other’s builds and designated tasks and sequences as needed,” Alex said.

Kristin shares the same sentiment, “I hope to collaborate with Alex more in the future because writing with her was very much edifying and fulfilling.”

Fast forward to 2022, “Dito and Doon” has received critical acclaim, the latest being nominated for Best Screenplay at this year’s Filipino Academy of Movie Arts and Sciences (FAMAS) Awards. The Janine Gutierrez-JC Santos pandemic film can also now be watched internationally on Netflix.

“To be recognized for something you enjoy doing is just incredible, and while I am grateful for the nomination, I am equally, if not more, indebted and thankful to the people who believe we can tell stories and believe the stories we tell,” Kristin said.

Alex, meanwhile, couldn’t believe her dreams had manifested. “This was my first film, and for me, seeing it out there was enough of a reward. So, hearing about the nomination was a very pleasant surprise. FAMAS was an institution I’ve only heard of and read about, so to actually be nominated is still very surreal for me,” she shared. 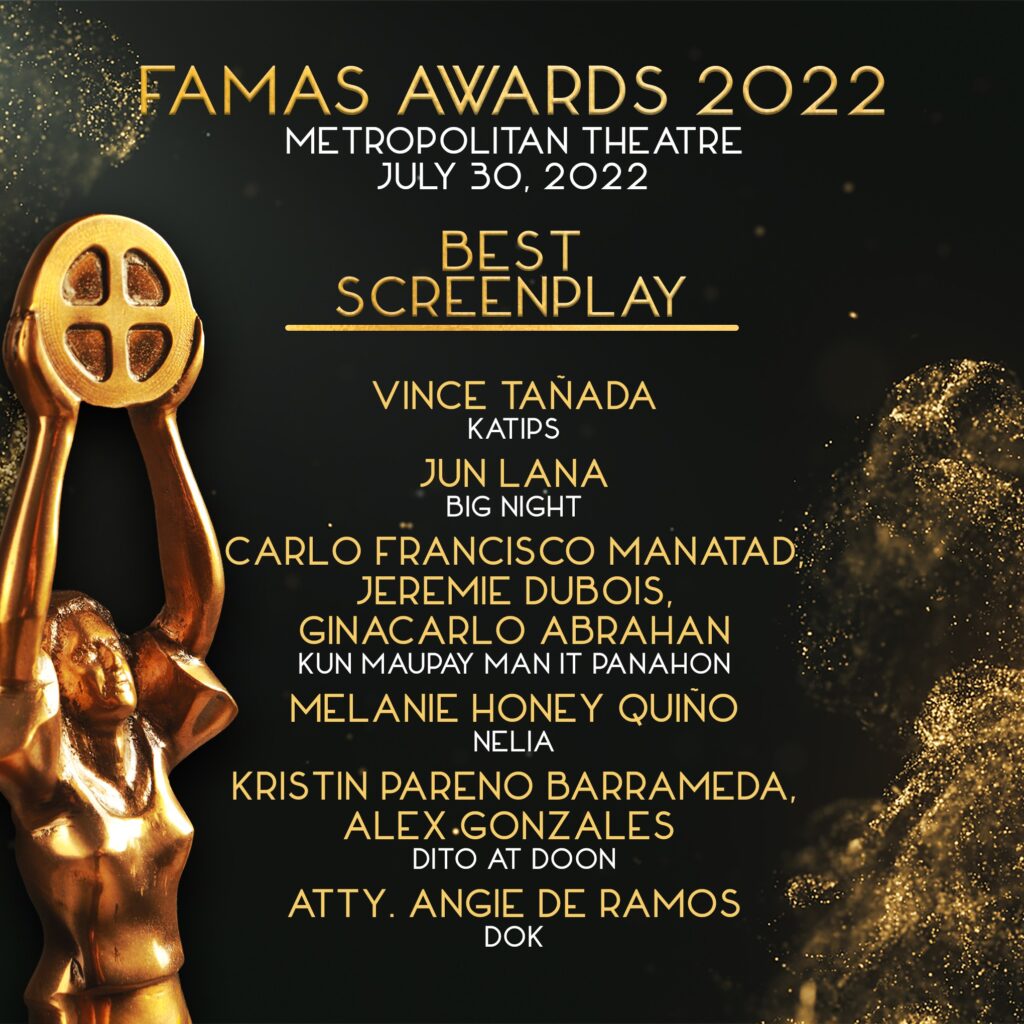 The Alex-Kristin writing duo would have to take the bench for now as both are focused on individual projects. Kristin is finishing her residency under Singapore International Film Festival for her first feature project “Bing. Bong. Bang.” She is also looking for funding for a short film project that she hopes to finish before the year ends.

Kristin’s next step, meanwhile, is to keep writing. “There were a couple of projects (one romance/drama and one horror) that were put on the backburner, but with the pandemic easing up, maybe those projects can be revived…? But other than that, my plan would be to just keep on writing.”

“To just always try and see where stories can take me.”

“Dito at Doon” (Here and There) is now streaming on Netflix worldwide. Watch here.