"A is for Agustin" hopes to inspire 'ripples of change' 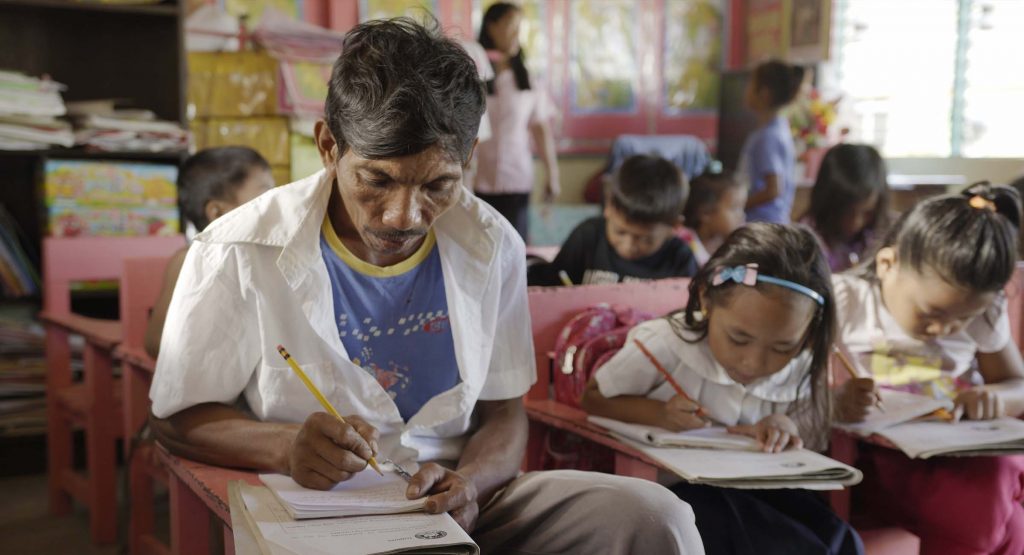 Documentary filmmaker Grace Simbulan spent 8 years in the Aeta community in Zambales to deliver one of the most powerful and compelling documentaries to date: the real-life story of Agustin Tiburcio, a man nearing his 40’s who decided to go back to school after years of being cheated on by unscrupulous employers who took advantage of his inability to read or write.

Simbulan shares her almost decade-long journey to bring to light this quiet yet moving story, her thoughts on our nation’s growing problem with access to quality education for indigenous communities, and how we all can work together to become agents of change.

How did you learn about Mang Agustin and at which point did you decide to make a documentary about him?

“In 2011, I filmed a mid-length documentary film exposing the environmental destruction caused by mining in Cabangan, Zambales and its impact (i.e. psychological, emotional, socio-economic, etc.) on the lives of Aetas. One of the issues I delved into was education. When I first met Agustin, I thought he was a worker in their elementary school. He was charming and popular with the students and teachers. When I interviewed one of the elementary teachers, I was amazed to find out that Agustin had just started Grade 1. Agustin, during our first conversation, told me about how frustrating his life before had been, since his illiteracy and inability to count made it impossible for him to count his own wages. He even mentioned having to compare the color of bills with his co-workers as his way to know if he was being cheated by his employers. The humiliation and the frustration he felt for all those years were the reasons why he was so committed to learning how to read, write, and count. As Agustin told me back then, his peers and relatives had thought he was a joke. However, this did not stop him. When I saw the contrast between how funny and charming he was in school and how hard his life was on the outside, I knew that his story had to be told. So, I turned my camera toward him.”

How long did it take for you to finish the documentary? What were the challenges did you encounter when you were working on this project?

“It took me 8 years, on and off, to finish this project. It was very challenging since at the beginning, I didn’t have the financial support I needed to make the film. Like a lot of beginner filmmakers, I went to various pitching events and applied to as many grants as I possibly can. Aside from the financial hurdle, getting too involved with your protagonists’ lives was also an issue I had problems navigating. Of course, I’m not saying that we should emotionally distance ourselves all the time but getting too involved has its own problems. Oftentimes, Agustin or Nanay Liway (Agustin’s wife) would consult me about their domestic problems. It was difficult to oscillate between my role as a documentary filmmaker and as a friend. Another challenge I faced was the constant fear that at any moment, Agustin, his family, or the whole community could question my intentions and why I was still filming after all those years. Thankfully, this never happened, and I think it was because our relationship was based on respect and sensitivity to each other’s needs. I didn’t force myself when I felt like they didn’t want to be filmed or if I felt like they needed space to breathe and just be.”

As a documentarist, what did you learn from following the story of Agustin?

“My 8-year journey reinforced my understanding of how exploitative our system is and how it works– that we can never truly achieve change if we don’t address the very source of people’s oppression and if we constantly vote [for] people who perpetuate the interests of the ruling class. As long as we live in a society where we can’t hold those in power accountable to the law, people like Agustin will always remain poor and oppressed.

On a lighter note, I learned the value of collaboration through this film. A lot of people helped and guided me in this 8-year journey whether that be in the form of mentorship, words of encouragement, financial support, or lending their time and creative expertise to improve the film.”

The film first premiered in QCinema 2019 and is now set for a wider online release, including international streaming via TBA Play. How does it feel now that a wider audience can see the film?

“I feel honored to have my first film seen by a wider audience. Like what I’ve always mentioned in previous interviews, I hope the film reaches the right people who can bring about tiny ripples of change.”

What takeaways do you hope the viewers can get from watching “A is for Agustin”?

“I hope the viewers realize that they have the power to make an impact on other people’s lives. And no matter what field or career you pursue, for as long as you strive to make other people’s lives better, then you’re in fact making those tiny ripples of change.”

Catch the award-winning documentary “A is for Agustin” available to stream in the Philippines on Cinema ’76@Home, Upstream, KTX, iWantTFC, and Ticket2Me, starting August 27.  International audience can stream “A is for Agustin” exclusively on TBA Play.