Film Fest Magazine: ‘TBA Studios is vital to the Filipino and Filipino-American Community’ 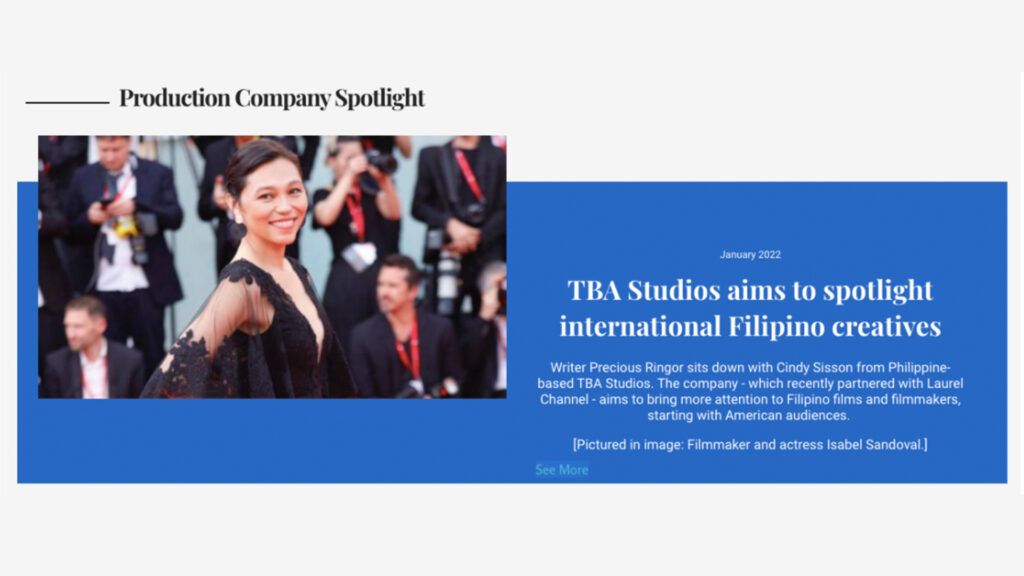 Film Fest Magazine, the top resource for film festivals, featured TBA Studios as their most recent “Production Company Spotlight”. Cindy Sison, Head of International Sales and Acquisition for TBA Studios, had a one-on-one with the publication to talk about the Philippine movie industry and the company’s recent partnership with the Laurel Channel.

According to the online magazine, TBA Studios left an indelible mark in the Philippine film industry thanks to its outstanding works such as the historical epics Heneral Luna and Goyo: Batang Heneral. The magazine also commends TBA Studios for its “relentless commitment to nurture and promote prominent and upcoming Filipino filmmakers” to a broader audience, citing the likes of ‘Luna’ and ‘Goyo’ director Jerrold Tarog, Mikhail Red (Birdshot, Neomanila), and Isabel Sandoval (Lingua Franca) as key to spreading Filipino talent internationally.

The topic of ‘Asian Pride’ and ‘Filipino Pride’ came up–a very timely conversation given the current issues faced by the Asian American community brought about by the pandemic. For Sison, movies can be a very impactful medium that can inspire and unite Filipinos.

“I think another common theme in our films is that they remind our audiences of hope, of home. Our films [reflect] the Filipino culture and the sacrifices we make for the sake of our families. Many don’t realize this, but our number one export is humans – OFWs [Overseas Filipino Workers]. For decades, families have been separated so that their children could have better lives,” Sison shares.

The movie industry in the Philippines has been greatly affected by the pandemic. With cinemas only reopening last November, TBA Studios have adapted to the disruption by making their titles available to different VOD platforms locally and internationally.

Discerning audiences looking for world-class Filipino films can find TBA Studios’ award-winning titles on the Laurel Channel, a subscription-based platform that would give cineastes access to festival features, indie films, and documentaries.

“As we make a transition to virtual cinemas, I hope we can have the same support online,” Sison said.

Some of the TBA Studios films available on the Laurel Channel (North America) includes Gasping for Air, Sunday Beauty Queen, Neomanila, Women of the Weeping River, Tandem, Heneral Luna, K’na the Dreamweaver, Bonifacio: The First President, Patintero, I’m Drunk, I Love You., Angelito, Bliss, Smaller and Smaller Circles, Us, At The End of the Year, and Write About Love.

For more on this interview, read the full article on Film Fest Magazine.